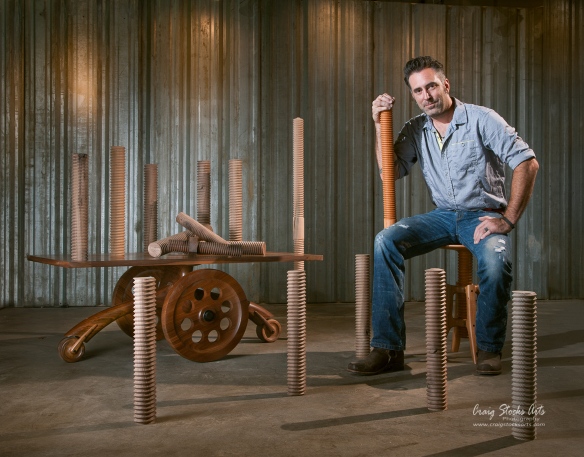 Everyone is familiar with spinning plastic chairs seen in offices; the ones that provide endless fun for children when parents need a five minute break. But what about a spinning chair or a table that is made completely out of wood? James Pearce, a woodworker, has created just that with woodscrews.

James is a “fourth generation woodworker” from Sierra Vista, Arizona and has been around woodworking for as long as he can remember. “I have a lot of great memories with my dad, grandfather, and me woodworking.” James didn’t attend college but joined the military instead where he worked with diesel engines. “I’m the type of person who likes to learn by doing rather than have someone tell me how to do something.” James met his wife, painter Carrie Pearce, in Georgia after he left the military. “She got homesick,” he said with a laugh, “so we came to Peoria, which is a great city.”

Through his long relationship with woodworking, James has always had an interest in art. “I find it very interesting and I’ve done a lot of it myself. It’s always been around.” Growing up around art, James has “in some way shape or form appreciated it or practiced it.” He believes art is a very complex skill that can’t be taught to everyone. “You can’t teach someone to make something aesthetically pleasing. You work at it, you study it, and you improve on it.”

James’ interest in acting out his ideas led him to create his woodscrews. “My wife and I were doing a show around Halloween and I wanted to create something that fit the theme, but moved in some way.” James thought of a large-scale wood screw and began trying to produce it. As a result, James came up with the appropriately named Spider Table, with its eight “legs” and darkened exterior. The table is made completely out of wood, including the large screw that allows the tabletop to rise or lower.

Visually the woodscrew is not a difficult thing to understand, according to James, but the process of making it is certainly a constant learning experience for him. “It may as well be magic; it’s difficult to explain.” James has gone through several woodscrews since the creation of his first one, constantly working with it to produce the pieces he wants.

James is interested in how he can modify the wood he is working with such as creating intricate curves. “I like figuring out how to make wood do something other than what people are used to seeing.” One table piece he created seemed to be made out of metal at first glance with its dark exterior and curving shapes. “To me it’s challenging to get the curves, dimensions, and the look of the piece correctly.” To James, the curves and textures in his work emulate a more organic style rather than having sharp and straight angles.

When he starts working on a new idea, James modifies his pieces as they are created rather than making detailed plans. “They can be designed down to the last moment, so I don’t typically sketch out my ideas.” His ideas are well thought out though, going over every detail from the wood and texture to how it moves. “It’s easier to erase a previous thought and go with a new one than to make a new sketch.”

James sells almost every piece he create and most of his products go pretty quickly. James is flexible when creating pieces for specific clients. “I will sit down with the client and figure out what they want. Some have very specific ideas and others will have seen work that I have done previously and want something similar.”

“I really look forward to the end product, but I wish I had more time with them sometimes before they’re shipped off,” he said. “I know they function, but I enjoy seeing how everything works after I have finished.”